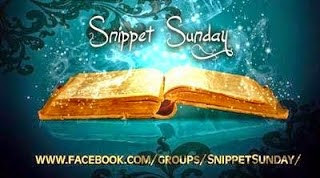 Joining #SnippetSunday for the first time. My WIP is Chosen, the third book in my Raven Daughter series, but my snippets are starting closer to the beginning. This is from Unveiled, the first book in the series which is already available.

Jo has only encountered Caius (Cay-us) once before and she didn’t know who, or what, he was then. Now, she does.

He dried my mouth and not because of his looks. Power exuded from him, like an invisible cloud he carried with him. I knew who this was now thanks to six months of intensive, catch-up learning. Caius, son of the Archdemon, Eisheth. Sinmar was the Head of Demonborn and this man was his second. He could kill me before I could even consider defending myself. Why he’d helped Rowen that night was beyond me.

“Wandering alone already, Reaper?” He took a step closer, crowding my personal space, and inhaled sharply. “I’m surprised Rowen doesn’t have you on a shorter leash. I could smell you all the way down the hall.”

My hackles rose at his tone. In spite of the fear that shot through me and sent my blood racing through my veins, I met his gaze with a defiant one of my own, refusing to back up a single step, even if that left me having to look up to keep eye contact. The earthy, spicy scent that was such a lure to mortals wafted around me. I remained unfazed.

“Dangerous of him to leave you all alone, being so new. So defenseless. Such…easy prey.”

“Go ahead and try. I know how to defend myself.” I hoped standing toe to toe with him, letting my mouth make me sound braver than I was, didn’t backfire.

As the son of an Archdemon, I would never be strong enough to take him on. If my father was an Archangel, that would’ve been different. But Elijah was only a Soldier Angel.

Caius chuckled low in his throat and something seemed to light behind his eyes. “Is that so? Want to test that?”

He bared his teeth, showing off the way his eye teeth had sharpened into slight points. I wanted to swallow to ease the dryness in my throat, but didn’t in case he saw it as a sign of fear. I just stood my ground, ready to bring out my staff in a last-ditch effort to not die.

“What are you doing here, Caius?” Rowen asked as he rounded the corner, his voice tense. “I thought you had other things to do besides lurking on reaper routes.”

“Relax, Rowen. You know I’m not here to take a nip of your newest reaper,” Caius said, his voice smooth. He put some space between us. I swallowed the sigh of relief that wanted to rise. “I just wanted to get a better look at the other one who is causing such an uproar. She couldn’t look more different from her sister than if they possessed at least one different parent.”

Though terrified, I drew myself up and glared at Caius as he walked slowly around me like I was a horse up for auction.

“Get an eyeful?” I growled.

Ignoring my remark, he said to Rowen, “Awful tiny for a reaper. Better make sure this one is capable of handling an eater before you turn her loose.”

I ground my teeth. “I can handle myself just fine.”

I hope you enjoyed this snippet.

Don’t forget to check out the other authors in the Snippet Sunday group on Facebook.