As Thanksgiving neared, I saw several posts lamenting the loss of a favorite dish because the maker of the dish would never give out the recipe and took it to their grave. I understand about having family recipes and keeping them close. I also acknowledge that without the wonderful sharing of recipes, we wouldn’t have the vibrant and varied food that graces tables around the world. If recipes were never exchanged, the world of food would be pretty boring. Since it’s still the holiday season, this recipe is still pertinent.

In that vein, I’m sharing the Pumpkin Pie recipe that has been in my family for at least a hundred years. Thankfully, once canned pumpkin became available, one of the ladies in my family’s past (likely my great-grandmother), was kind enough to tweak the recipe to accommodate that and it doesn’t call for the processing of your own pumpkin first. Of course, if you wish to do that, have it. I already do so much making things from scratch, preserving, and canning, that I know there is only so much that can be done.

Now, the few times I’ve attempted to discuss this recipe with others, I’ve gotten interrupted with, “That’s not how it’s done.” Or, “That’s not how I do it.” Well, good for you, I can’t help it you’re wrong. At least with this being a blog post, you can’t interrupt me. Complain in the comments that you don’t do it this way, but not interrupt me.

Also, I can’t imagine we are the only people in the world who make pumpkin pie this way. Someone else out there surely has a recipe that is at least similar, though I admit to not having seen it. Although, since I have this recipe, I’ve never actually gone looking for pumpkin pie recipes, so it’s entirely possible it’s already out there. In the event that it isn’t, here you go. This makes two pies. 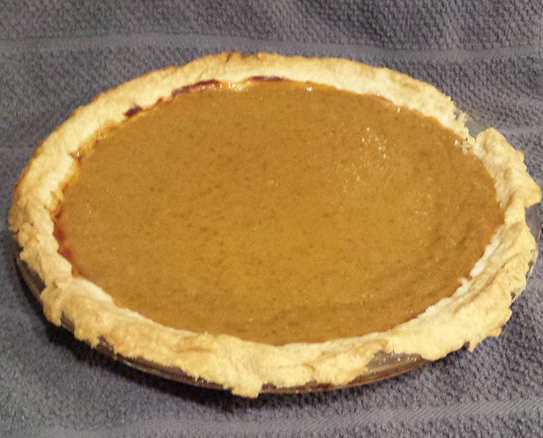 Yeah, I know the crust isn’t pretty (but it’s tasty), and I’m not the best food photographer in the world, or the state, or probably even the county.

1  15 oz can of Libby’s Pumpkin (seriously, we’ve tried other brands. For this, stick with Libby’s or make your own)

Mix these three things together.

(No, there is no ginger in this. Do not mess with it. I can’t help it your pie recipe is wrong.)

Mix the spices in.

2 cups scalded milk.  No, not condensed, sweetened, or any of that other crap. Put two cups of whole milk (yes whole, your diet/cholesterol/whatever will survive one dish) and place it on the stove top over medium heat and bring it to just before a boil. A nice skin should form on the top and ripple when you move the pot a bit. I  have, during busy meal prep, occasionally forgotten the milk and it reached a light boil. It’s not the end of the world and can still be used though I recommend catching it before that point.

Now, if you can’t consume dairy, then I suppose you can try almond milk or whatever you use, though I have never attempted it and can’t vouch for the end result.

Mix the milk in. The batter will be quite thin, that’s okay. Pour into two pie shells. Deep dish works better because there is less chance of it spilling on the way to the oven. I haven’t spilled any in years, but I’ve had a lot of practice getting these from the counter to the oven.

Put it in the oven (which should be preheated to 400 degrees Fahrenheit since I told you to do that back at the beginning) and bake until a knife inserted in the center comes out clean. I’m not sure of the exact baking time since I know by smell when to start checking it. There will still be a slight wobble when its done, so be sure to check. I would say roughly 35 minutes, but that is only a guess. Also, the temp will vary by oven. Mine tends to run a little hot once it gets to 400 (although does fine at 350, but my stove is weird), so I actually bake these at 390 in my oven. 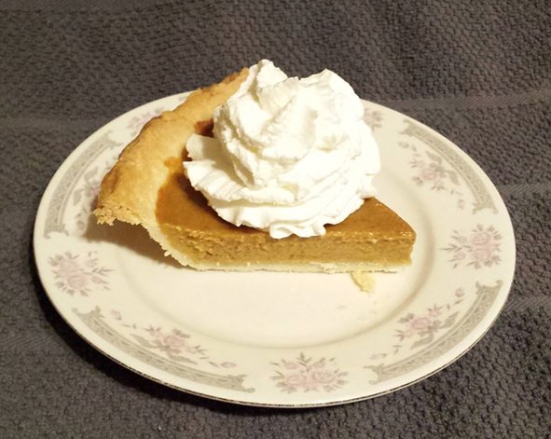 When the butter knife inserted comes out clean, remove the pies from the oven and place on cooling rack. Let cool completely, top with whipped cream, Cool Whip, or whatever, and enjoy.