Welcome to the official release tour for Breaking the Nexus by Lindsay Avalon! This action-packed paranormal romance will be released on 12/12/12 on Amazon in ebook and print!! To celebrate, Lindsay will holding giveaways throughout the month and a release day party filled with games and plenty of prizes!

The blog tour runs from Dec 1-31 and there are over 40 blogs participating! Join her on each stop as she shares exclusive snippets from the book, answers interview questions, or guest posts, and leave a comment to enter for your chance to win prizes!  Don’t forget to enter the rafflecopter grand prize giveaway while you’re at it! Prizes include Breaking the Nexus swag, ebooks, custom jewelry, and more!

For a complete list of blogs participating, dates of special giveaways, the grand prize rafflecopter, and a list of the amazing authors generously donating books and swag, check out the special page on Lindsay Avalon’s blog: http://lindsayavalon.blogspot.com/p/breaking-nexus-blog-tour.html 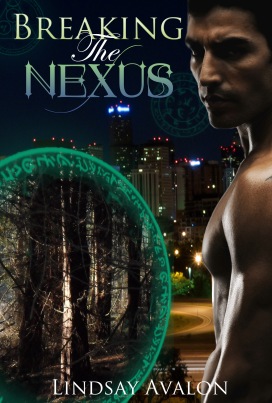 Throughout history, myths and legends of extraordinary creatures have been told and retold. Fantastic tales of demons and banshees, gryphons and dragons, and of course, magic. Stories that every child grows to learn are nothing more than fantasy…or are they?

Beyond the world you see lies a hidden realm, the Mythrian Realm, inhabited by all of the creatures you’ve been told are mere fiction. Only one thing lies between humans and the truth: the Nexus. A magical barrier erected millennia ago to separate the two realms, it has stood the test of time. Until now.

For Mythrian Sha Phoenix, magic is nothing new. But when she stumbles upon a portal on the verge of collapse, her fate will forever change. Pulled through the portal into the Human Realm, she lands in the middle of Detective Connor Flynn’s brutal murder scene. Soon it is obvious someone is using blood magic to try to bring down the Nexus. Together, Connor and Sha must work to unravel the secrets before the barrier falls and the realms collide.

The Nexus is breaking and all hell is about to unleash…literally.

As he walked up a set of stairs, the movement jostled her. If her lips just happened to brush against his neck when her head moved against the crook of his shoulder, it wasn’t her fault. She watched his throat work as he swallowed hard. Good, she was getting to him. Served him right when he’d gotten under her skin.

“Stop that,” he ordered, the command holding no heat. He shifted her weight for a moment while he unlocked the front door and pushed it open.

Unable to resist pushing him a little further, she brushed her lips against his skin once more. “Stop what?” Sha gazed up at him, the heat of his eyes making her melt. Those metallic eyes shifted and swirled unlike anything she’d ever seen, even among the Metallum Sorceri she’d met over the years.

He let her body slide down his, hands settling on her hips, holding her body close against him for a moment. “You’re playing with fire,” he warned.

“That’s alright, lucky for you, I’m an Infernum.”

“Really? And what does that mean?” Although he towered over her, his head was bent and she thought she might be able to reach his mouth if she stretched

“It means I happen to like playing with fire,” she whispered, standing on her tip toes to brush her lips to his.

She’d intended it to be a brief kiss, more of a tease than anything else. They hardly knew each other and had just escaped from a potentially deadly situation, after all. But the moment their lips met, all rational thought became impossible, incinerated by the flash of desire that swept through her.

One hand slid into her hair and fisted, pulling her head back to give him better access to her mouth. His tongue swept over hers, drawing a low moan from her. By the flame, his taste. Her hands grasped his coat as she pressed her breasts against his chest, pressure building low in her core. He was staking his claim on her, and she wanted more. Frantic to feel him, she pushed her hands beneath his shirt, running her fingers along his chest through the dusting of hair on his chest. Too soon he broke away, both of them breathing heavily.

“That—that probably shouldn’t have happened,” he said after a moment, stepping back to put some distance between them.

Sha touched her lips, swollen from their passion. Kissing him had electrified her senses, energizing her more than when she tapped a node, a direct line to power. It would be all too easy to become addicted to him. “That’s funny, I was thinking it should happen again.”

“Sha, I’m serious. I’m supposed to protect you, not make out with you on my porch.”

“Connor, I’m serious,” she mimicked. “I can protect myself and I don’t know what ‘make out’ means, but if it makes you feel better, I kissed you.”

His hand smoothed over her hair, brushing it from her face. “You’re a witch, aren’t you? Say it again.”

Confused, she cocked her head to the side. “Huh?”

“My name. I liked hearing you say it instead of ‘Detective.’”

Her heart melted a little. She had to tread carefully or she’d end up falling for this man. “Connor. And I’m not a witch, I’m a Sorceri, there’s a difference.”

I am a wife, a programmer, and now an author. I have an adorable mini 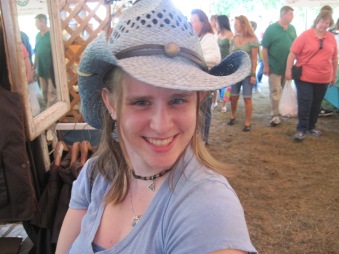 Schnauzer and more books than I have room for. I love reading romance because no matter what may be happening in my life, I can always count on my books to end happily ever after. The day I met my husband was the day I truly began believing in happily ever after. After hearing me complain a few too many times that I had “nothing” to read despite the hundreds of paperbacks scattered around the house, my husband began suggesting I write my own stories. When I finally took his advice I discovered that although I enjoy my day job as a software engineer, my true calling is to be an author.

My sister drilled into me an appreciation for fantasy and mythology, something I try to bring to my books. My debut novel, Breaking the Nexus started as a book written for NaNoWriMo and has grown to so much more. It was the conduit that introduced me to a fantastic group of independent authors who have changed my life in unimaginable ways.

When I’m not writing, I’ve found a passion for blogging and interviewing fellow authors. I also love reading (of course!), baking, crochet, sewing sock monkeys, playing video games, and all sorts of random crafts. I have an incurable love of rubber duckies and stuffed animals, and I believe nobody should have to grow up if they don’t want.

One thought on “Breaking the Nexus Release and Blog Tour Stop”